Francis, the Saint known and loved the world over, was born at Assisi, in central Italy, in the year 1181, the son of a wealthy merchant.  He died there in 1226, after a life in Christ that earned him the title “Poverello” – little poor man.

As a youth, like many young people today, Francis “discovered” Jesus. He found Him in the Gospel, poor and suffering. Francis made up his mind to identify himself with his crucified Lord. In the words of Pope Pius XI, “So lifelike and strikingly did the image of Jesus Christ and the Gospel manner of life shine forth in Francis, that he appeared to his contemporaries almost as though he were the Risen Christ.”. Saint Francis attained this marvelous ideal by making the Holy Gospel, in every detail, the rule and standard of his life.

Others wanted to live as Francis lived, men and women, single and married. These followers became the Franciscan Family.

Friars (First Order): Priests and Brothers who live in community with vows.

Secular Franciscans (Third Order): Lay people and Diocesan Clergy living Gospel simplicity in their homes, promising to follow the Rule of the Secular Franciscans, and to live the Gospel in the spirit of St. Francis. 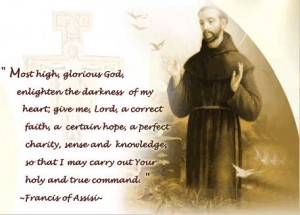 The simple, Gospel way of life of St. Francis of Assisi attracted a vast number of lay people and Diocesan Clergy. They received direction from Francis and were known as the “Brothers and Sisters of Penance”. Receiving an official Rule in 1238, they were called “The Third Order of St Francis” and today we are known as the “Secular Franciscan Order”.

Secular Franciscans are to pray daily, imitating the prayer life of Francis. He put great  emphasis on the “spirit of prayer and devotion”. The intense, simple and spontaneous nature of his prayer is summarized in his famous prayer:
“My God and My All”

Secular Franciscans assemble frequently as a true spiritual family called “Fraternity”. We gather to meet with one another, share our struggles, celebrate our successes, to rekindle our  Franciscan ideals and to receive nourishment for our spiritual journey.

As a Lay Order, the Secular Franciscan Order stresses conversion, seeking Christian perfection first. The second basic but equally essential aim is the personal and social apostolate. Secular Franciscans are expected to be active in their Parishes and to give special care to working in six areas that should be concerns for every Christian today:

We are called to be messengers of Peace, Joy and Hope to our families and to society by the example of our daily lives.